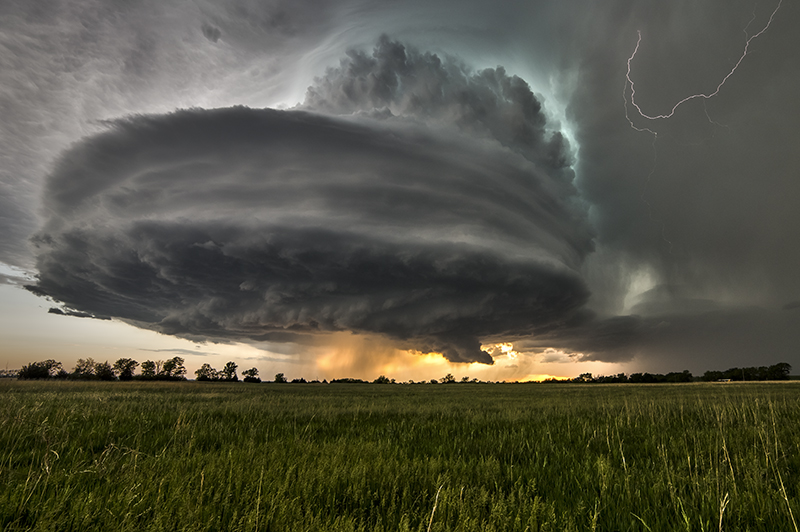 The second part of the viral Flint Hills Invasion, Severy, Kansas Supercell image, also seen on this website. By this time, the mesocyclone had moved nearly overhead. My hope was to capture a few cloud to ground positive lightning strikes, but at this moment all the supercell could muster were a few anvil crawlers. The rest of the story continues below.

The day that almost never was... Saturday May 10th, 2014. My original target was the Kansas City metro area, tornadic supercells were likely along the warm front. I stayed up late the previous night, and got a late start leaving Norman just before noon. By the time I reached Tulsa, storms were already blowing up around the Kansas City metro, at that point I decided to head up into southeast Kansas and wait for any new development to the south. Eventually several storms erupted along the dryline near Wichita in south central Kansas, and I headed west.

The first storm fizzled out before I reached it, but the second supercell produced a corkscrew mesocyclone, and spun like a top. It appeared it might have a chance to produce a tornado but suddenly it ended up meeting its demise. The next supercell to form will be one that I remember the rest of my life. At first the structure was not great, but by the time it reached Severy, Kansas it had blown up into an alien invasion ship of epic proportions, as seen in the picture above.

I quickly located a grassy field that would help provide a formidable foreground. There I shot away as the mesocyclone continued to advance towards me. The sun, the teal light peeking out of the updraft, the structure of the mesocyclone, and many other small details makes this my favorite shot ever. One that I believe I will have a hard time topping. I am truly thankful I overslept and ended up at my secondary target.